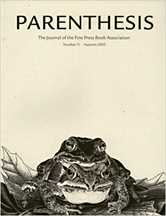 Reviewed by David Evans for Parenthesis: The Journal of the Fine Press Book Association, Autumn 2005

At first glance Korea resembles an elegant notebook or diary more than a book of war photography. Its look and feel project a mood of quiet contemplation; the pattern of its cover, textured in rich, deep earth tones, suggests hills and cultivated valleys. This is not a volume that promises to glorify military struggle or expose its carnage. The words ‘Victory’ or ‘Valour’ do not appear. There are no words at all on the front cover. Only the title and author’s name are printed in gold near the top of the spine. There are no flags, no memorials, no rows of crosses. In fact, the war is just the backdrop to the drama of the human condition- a personal account related in a sequence of powerfully moving images created by a truly visionary photographer.

The first of Dave Heath’s photographs covers a full page facing the title page. Cropped from a larger image, its scale and immediacy pull the viewer into the place and time. It is Korea in 1953 or 1954, near the end of the war. A unit of soldiers with their weapons and equipment appear to be heading into action. Some watch as others march by on foot beside a wooded hill. The two or three whose faces are visible seem grim, expectant, resigned. One holds a cigarette, a tight, nervous expression on his face. Another, standing in a jeep, folds a dark blanket as he watches the marchers. There is a sense that the cold, the mud, the discomfort, is to be cherished for a last moment- what will follow may be fearsome. Mixed with this sense of anticipation is a slight mood of bewilderment, as if no one is really sure what is going on, or why he is there. This image serves as an introduction to an emotion that forms the core of this series of images. Heath was working entirely on his own, thinking and feeling deeply about the circumstances he and other soldiers were experiencing, and discovering how photography could be used to express his concern. He was not using a camera to earn money or fame or even to document the war, he was exploring the potential of the medium to get to the root of the human condition. The body of work he created during this year in Korea became the genesis for his later work. In 1965 he published A Dialogue With Solitude, which was become a classic. It was republished in 2001 by Lumiere Press.

In Korea, Heath’s sequence of twenty-four photographs is framed by two texts: an introduction by Michael Torosian, and excerpts from interviews he conducted with the photographer. Apart from the title page detail, two additional photographs have been inserted, one into each text. The second, surprisingly, is in colour - Heath experimented with Kodachrome while he was in Korea. It provides an interesting counterpoint to the monochrome images and shows that Heath wasn’t a dogmatic purist in his use of the medium.

Torosian’s introduction, ‘A Pilgrim’s Progress’, succinctly outlines the history of the time and traces Heath’s development as an artist. Torosian lists influences as diverse as Bruegel and Minor White, but a major influence was a photographic essay by Ralph Crane in LIFE magazine. Heath had not yet turned sixteen and had been abandoned by his parents at the age of four. He was living in an orphanage. Crane’s essay was about foster children just like him and Heath’s identification with the story was so strong that it became a turning point in his life. He went to a library and began to learn about photography on his own. ‘Through a confluence of fate and intuition, in one long weekend Heath had encountered the twin precepts of personal identification and sophistication in visual structure that would be at the heart of his mature work’, writes Torosian.

In the interview section, entitled ‘A Year in Chorwon’, Heath reflects on his experiences in the army and how the photographs were made. By the time Heath was inducted into the infantry at the age of twenty-one, he had already developed a deep commitment to photography. Overshadowed by the earth-shattering events of World War II, the Korean War came to be known as ‘the Forgotten War’. Heath was a reluctant draftee but managed to assert his independence without breaking the rules. Through determination and perseverance he was able to equip himself with a camera and a good supply of film. The experience changed him fundamentally. He evolved from being an admirer of the LIFE magazine style of picture reportage into a photographer with a unique and personal ‘voice’.

The genius of Heath’s photography lies not in its ability to represent appearances, but in its capacity to evoke an intense emotional atmosphere. It is impossible to look at them and not feel empathy and compassion for his subjects. They reach out and grab you by the heart. In an opening statement, (a dedication one might say), Heath refers to these Korean photographs as being ‘…like a family album’. He was an ordinary infantryman and unlike the famous war photographers of the era (such as David Douglas Duncan), he had no press credentials and had to scrounge for a camera and film; so his photographs were made from the war’s emotional centre, not from the outside looking in. What he created are photographs of great modest and sensitivity. They are pictures of wartime camaraderie made with a sincerity that can only be expressed by one who lived those experiences. The photographs in this ‘album’ are convincing enough to make you weep. They are so beautifully composed and printed that Heath’s reverence for the great masterworks of painting glows in each face and throughout each scene. Heath describes his reaction upon seeing the first prints of what he had been shooting: ‘Basically, when I took the pictures I was photographing a homesick soldier standing in a tent door. But when I got these three by five inch drugstore prints back and I saw the close-up, I no longer saw Howard. I said to myself, “If I was a painter, this would be my study for a Christ figure.”’ This seems to have been a cathartic moment for Heath; he recognized that an intimate, personal view could have biblical dimensions. He goes on to recount that after the war, when he came across a reproduction of Leonardo’s Last Supper, he recognized a similarity with his photograph of Howard and ‘…[I] realized the picture’s iconic possibilities.’

Korea demonstrates how great photographs do not have to be enlarged to billboard proportions to be powerfully moving works of art. Torosian cites two books, Walker Evans’ American Photographs and The Inhabitants by Wright Morris as two of the most important influences on the nascent photographer. Heath made his first book (without any assistance) in 1952 and clearly he is most comfortable with this intimate format. A book that can be held easily in the hands allows the viewer to appreciate the images in relation to each other, to flip back and forth - just as one might with a family album - and to see the images in sequence. Heath understood clearly the importance of editing photographs to create an engaging narrative. With a few exceptions the images are about the same size as the drugstore prints he had made of his work while in Korea. The reproductions are a delight, printed with a rich tonality that does justice to the delicate, natural light Heath records with such graceful sensitivity. The text pages have a look and visual texture that makes reading a pleasure.

Heath’s compositions have such a natural feel that it is easy to imagine being a participant in the scene, not merely a detached observer. This makes Heath’s close relationship with his comrades is so compelling, for in spite of this apparent closeness, or perhaps because of its intensity, there is also a mysterious sense of longing that pervades these images. Although there are many close-ups, where the photographer could not have been more than a couple of feet away, I could find just two instances where the subjects look directly into the lens of the camera. Everyone is lost in his own reverie or attentive to another but not to the presence of the man behind the lens. Except for a photo of a group of soldiers who are clearly posing for the camera (not the photographer), it is as if the photographer did not exist at all. For all the obvious proximity and bonding going on, there is a profound feeling of loneliness in these images. It is this strongly compassionate identification with dislocation and separation in Heath’s photography that strikes a chord in those familiar with his work. Heath was acutely aware of human suffering, especially in the context of authoritarianism and rampant technology. One might speculate that the army, for Heath, was simply another kind of foster home, and he could identify in his comrades the alienation and anxiety with which he had become all too familiar as a child. Even though these men are not engaged in combat, mortal danger is never far away. Near the end of the sequence a man lies on his bunk with a faraway gaze in his eyes; the image on the facing page is a moonlit valley with ghost-like figures on patrol in the foreground and clouds hanging in the hills in the distance. Is that enemy territory? The final image is perhaps the spookiest. We look out from dark underbrush beside a road where troops are marching by. Brightly illuminated dust from the road suggests that vehicles have just passed. The photograph seems as if it was taken from the point of view of an enemy lurking in the dark shadows of the forest, waiting to ambush them.

‘In Korea, photography was my defining moment’, Heath says near the close of the interview. Through his passion to photograph what his heart felt, he had found a way to relate to the world and he had discovered what he needed to say. The camera gave him the means to express his inner mind, and Heath felt its potential to create a communion spirit as few photographers have. The medium of photography is deceptive. Anyone can pick up a camera and produce fine images with little or no training, but very few photographers have the instinct to give them lasting meaning. It is a simple art that is exceedingly difficult to master. Through the viewfinder, the world can look both closer and more distant. War photographers sometimes describe a feeling of being invulnerable behind the camera, yet completely involved in the moment without any separation from the action. There is an illusion of reality so convincing that it calls reality itself into question. The photographer’s perception defines the nature of what is really out there and simultaneously the photographer is defined by what he sees.

Heath uses photography the way a poet uses words. The images are simple and unpretentious, but their impact is unforgettable. Korea is quite disconcerting in this way. It is a very pleasant book to look at, to read, to touch, and to turn its pages; its contents are peaceful and yet disturbing. It is light and modest in its scope and physical dimensions but vast in its human implication because it carrier the weight of a personal history. It is extremely rare to find a book of photographs as moving as Korea; we are fortunate to have this opportunity.